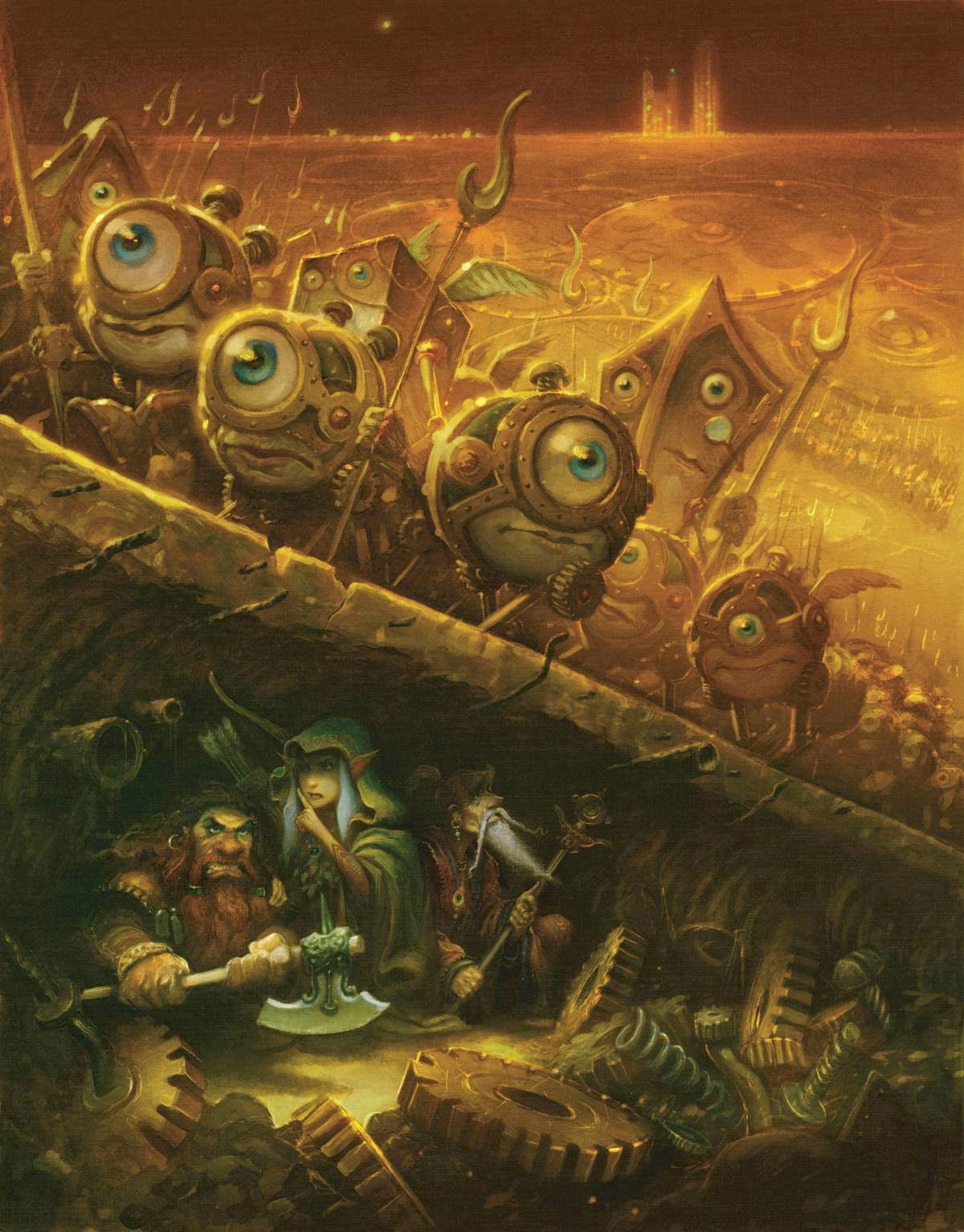 I won’t deny it, I really enjoy the ideas of parallel realities, distant dimensions, entire planes of existence, and so on and so forth.  It’s one of the things that initially got me into comic books, as well as games such as Dungeons & Dragons (because Planescape is awesome.)  Truly, all forms of reality are at your finger tips with your imagination as the only possible restraint.  So with that, here’s some reasons why I would encourage the creation of a multiverse, whether for roleplaying games or for writing something else entirely.

Before the Time Machine and even cautionary tales of wandering into Faerie Rings, we’ve heard tales of worlds beyond our own. Through the ages, realms of myth and faith alike have given us tales of a universe resembling a tree, the road to the afterworld resembling a long log bridge, celestial cities in the sky awaiting the righteous and redeemed, masks connecting us to spiritual and godly realms among others.  Since the dawn of civilization, we have looked to the stars and wondered the possibilities of worlds beyond our worlds.  In a sense, these are the first explanations and views on alien life, a staple of sci-fi for eons.  Even popular games incorporate mythical dimensions into their assumed cosmology.  Take World of Darkness, you have realms of strange spirit beings in Werewolf and the Fae Realm of Arcadia in Changeling.  These dimensions are clearly alien in nature, but something about them feels quite familiar and carries a mythic tone for a good reason.  The notion of cosmology can be traced back 10,000 – 20,000 years at least.  Artifacts like a lunar calendar as well as wall paintings indicate theories about great beings and where they come from.  Civilizations such as Ancient Egypt, Mesopotamia, Greece, Rome further developed divine views of the stars above and what they mean.  Strange dimensions, holy realms, and weird worlds are all a part of human civilization since its beginnings.

As a more modern trope, it really allows for your imagination to any time, any place, just anywhere in general.  The sky’s not even the limit anymore, as you can encounter countless skies!  Now, this idea of using the multiverse as a device to explore all sorts of neat places isn’t new.  Science fiction has explored the boundless reaches of reality as if it was traveling a vast sea between countries. BBC’s Doctor Who shows us countless adventures across many worlds, dimensions, and realms.  Whether it’s a near-future England where Morgan Le Fey tries to take the world (from the episode, Battlefield) to a sentient asteroid at the edge of reality where all matters of life are consumed (as seen in The Doctor’s Wife), The Doctor and his T.A.R.D.I.S. invite us to come along on all sorts of fascinating (and at times confusing) adventures across multiple planes of existence.  Of course, the Doctor isn’t the only adventurer to traverse the planes themselves.  Games like RIFTS and the Dungeons & Dragon settings of Spelljammer and Planescape give you the ability to explore countless realities and possibilities.  While RIFTS takes place in an Earth destroyed by countless tears in the fabric of reality, ripe for exploration after ages have healed many of Earth’s wounds.  Planescape, on the other hand, assumes you travel the Inner and Outer Planes, possibly stopping in a center-of-the-universe-turned-planar-hub known as “Sigil The City of Doors.”  Meanwhile, Spelljammer is a wonderful mix of Pirates of the Caribbean and Star Trek!  So, when one wants to literally sail the sea of the astral plane, the last option lets you literally do that!

On the following note, the concept of a multiverse allows for your stories and games to take a slight detour when the material realm begins to feel too mundane and commonplace.  Readers and gamers tired of dragon’s lairs and goblin swamps?  Let them visit the Demiplane of Faerie, the domain where both races originated from in the first place!  While this type of break might be jarring for some, others would find it to be a breath of fresh air.  Jumping back to tabletop gaming (or Pathfinder, in this case), various adventure paths highlight different takes of planar transitioning.  The Reign of Winter adventure path involves stopping a daughter of Baba Yaga from freezing the world.  Using the dimensional traveling Dancing Hut, you eventually visit a frozen alien planet as well as planet Earth in order to stop other scheming relatives.  In the case of the Kingmaker adventure path, the game focuses on thwarting all sorts of forces that threaten your recently established frontier kingdom.  Seemingly with little set up, there’s an incursion of the fey that leads to the First World (Demiplane of Faerie, massively expanded upon.)  This transition is jarring for the reader/gamer and this sharp turn may prove to be deterring for a lot of others too.  However, this shocking jump can really catch the reader/gamer off guard and provide quite the surprise.  Done well, it radically shakes things up while getting the audience engaged for something entirely new.

Beyond the planar vacation, it gives an opportunity to explore all sorts of exotic locations as well as strange creatures.  Take the crew in the various incarnations of Trek; daring to explore the last of the final frontier, aiming to spread diplomacy throughout the universe or defend others trying.  Along their journeys, they encounter countless amazing places and alien beings.  Many are eager to discuss various matters (politics, assistance, war and of course acquisition) while some would rather blast them right out of the cosmic reaches.  Many of these beings are complex with their own rules and societies, while others are more incomprehensible and unfathomable in nature.  For the aspiring writer/games master, the freedom that the multiverse unleashes allows you to truly build a universe, a world, a civilization and a race from scratch.  And by all means, if all the work pays off, the audience will love it.  At the very least, they’ll be curious about the strange and wonderful sights you provide them with… and of course, even stranger obstacles.

Speaking of threats and foes, the domains beyond our own are certain to deliver.  While mundane villains will always be fun, one from a place either extraterrestrial or extradimensional adds a layer of fascinating weirdness to them.  This strangeness can be something out of the exotic or something out of the horror stories of H.P. Lovecraft.  In fact, much of my interest in Lovecraftian horror stems from how truly out there all of these eldritch beings are.  Their cosmic sensibilities are as horrifying as their are genuinely interesting.  Their method of thought makes sense within their universe but makes none to us!  And we’re so alien to them, we can’t possibly understand them either.  This massive clash is ripe for conflict.  If Lovecraft isn’t your thing, one can sample across the realms of science fiction and fantasy.  Why not create foes that present various planes of existence or modes of thought.  This is another one of my favorite things about D&D Planescape.  The Outer Planes represent a variety of philosophies and ideas, separated by their alignment (morality/ethics) system.  Encounter magical beasts in the Beastlands, clockwork Modron in Mechanus, insane Slaadi in Limbo and so on and so forth.  Some of the creatures are driven by passions, openness, a sense of freedom.  Others are rational, reserved and motivated by order and restraint.  And much like the Factions of Sigil (philosophers with clubs, essentially), they are representative of their own ideas.  If one doesn’t want to go that elaborate, one could have an alternate version of themselves or something familiar to them.  This brings me to another thing that’s great about the multiverse.

Another cool thing about the multiverse is the concepts of alternate realities and alternate timelines.  Now, by all means, this is far from new.  This gives the writer a chance to really explore the “what ifs” within their story.  While it can defile the canon, the main concern is speculating how things could be different is an element of reality were changed, whether that be within space or time.  One of my all time favorite DC Elseworlds “What Ifs” asked what would happen if Superman was born in the Soviet Union instead of the United States.  This story, entitled “Red Son”, took the Superman Mythos in a fantastic look at an alternate Cold War.  And in the end, the characters we know and love are still much the same; Luthor’s a power crazed lunatic, Superman wants to help humanity to the best of his abilities, Lois is a relentless worker striving to do her best, etc.  In the case of other instances, some are literal different realities that can be stumbled upon.  Jumping back to Doctor Who, we see a reality in a multi-episode arc where Rose Tyler’s father never died… only for him to help revive the cybermen!  Not only do we see time written in a different way, but we get a completely different origin story for one of the Doctor’s greatest foes.  Though, by far one of the most iconic uses of alternate universe is classic Star Trek exploring a reality where everyone’s personality and morality are flipped somehow.  In fact, the image of “Evil Spock” is so iconic, it has lead to many fantastic parodies across not only sci-fi, but popular culture in general. Related to alternate universes, one of my favorite uses of the trope comes from Michael Moorcock’s Elric series and expansive universe.  While Elric of Melnibone is already a fascinating deconstruction of then popular fantasy tropes, the world goes deeper.  Elric is but one of many heroes across reality with many similar missions and goals.  This is referred to as “The Eternal Champion”, heroes throughout many realities that seek to protect it in different ways.  These heroes are intrinsically linked through space and time, all serving the call to defend in one way or another.  The name comes from the 1970 book that introduces the concept.  It’s a great way to link several tales in an anthology style.  One could argue the survival horror/lovecraftian horror video game, “Eternal Darkness: Sanity’s Requiem” might fall under this trope. With countless people linked by the Tome of Eternal Darkness, trying to fight back the horrid powers of The Ancients, it’s likely the creators took much inspiration from Moorcock.  As for story craft of your own, it’s a great means of linking epic tales from across the cosmos, perhaps allowing for them to meet up and discuss many an issue.  But at that rate, you be creating an interdimensional justice league… which is still pretty awesome.

All in all, the multiverse is a creative option that not only allows for all sorts of creative ideas, but allows for much leeway when trying to convey them.  If you’re running a roleplaying game, it’s easy to hand wave strange races without them feeling out of place.  In the sense of writing, it gives your world a place in an overarching story.  Beyond, worlds beyond worlds, it allows for you to explore an assortment of amazing new characters you wouldn’t have considered otherwise.  On top of that, these characters can be shades and alternate versions of your own.  While I dislike for the trope is understandable, as it adds a certain “gonzo” sensibility, among other things, it can also allow you to unlock countless possibilities for your stories, your games, and your worlds.